For the women and young girls the major source of employment was found in the village shops or in the large houses and guest houses as housekeepers, maids, cleaners etc. As a young boy Bill Squires found work at the Cleave Hotel as a general “dogsbody” living in” six and a half days a week for five shillings. Two other female employees “lived in”. One was “a pretty, black-haired young girl” called Norah Hatherley. She was full of fun and looked quite stunning in her black dress and white apron. She was the general assistant and waitress for serving table”.

“I had to be down in that kitchen at 7 o’clock in a morning, clean the range out, clean the flues every morning, it was two flues we had, ’twas the double oven, and when you cleaned that fireplace, the range, you had to see your face in it, ’twas like silver when you’d cleaned it…I never used to go to bed till ten to half past and in the summer time when we had people in I was up about six and went to bed half past eleven because, we had to do everything, we had to clean the shoes of a morning, I had to bring all the shoes down…”
Mrs Norah Wright (nee Hatherley b.1914) 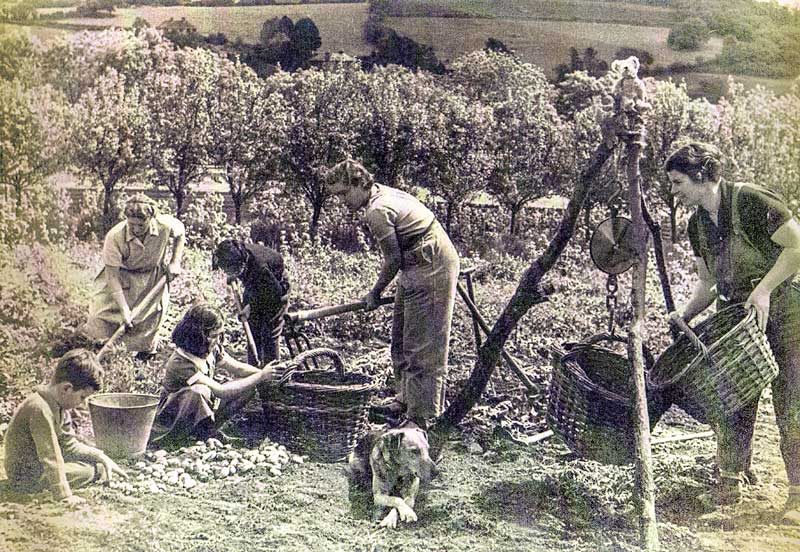 From the second half of the twentieth century, with the decline in farming and mining, the loss of the railway and the closing down of shops and businesses these opportunities for employment have either disappeared or are strictly limited. Many working people must now commute to Exeter or Plymouth or the neighbouring towns. With the modern advances in communication some people work from home, from where they can run their own businesses.

There was always plenty of gardening work for Lustleigh men and boys.The many large houses, particularly those built in the nineteenth and early twentieth centuries, were generally owned by the well-to-do who were able to employ a full-time gardener and sometimes two. In the period after the First War World the wage was around £1.10s. to £2 per week.

There were several market gardens in Lustleigh in the twentieth century. One of these, on the corner of Caseley road was run by Mr. and Mrs. May who also ran a tea room for visitors.

Boveycombe Flower Farm at Lower Hisley was owned by the Gould family who grew potatoes in Boveycombe Field (now lost in the woods on Lustleigh Cleave) during the Second World War.

THE ARCHIVE ROOM WILL BE CLOSED UNTIL NEXT YEAR.  THE TALKS PROGRAMME IS ALSO SUSPENDED… read more….

Sadly, bearing in mind the small size of the room, the cost and effort in sanitizing all vulnerable surfaces and the nature of the work (which involves the handling of files and papers by several people), The Lustleigh Society has decided that the archive room will remain closed for the rest of this year.

Since we always shut in December and January, the proposed date for re-opening will be the first Monday in February, 2021.

If you need to contact us for any reason, or have an enquiry we can help you with via email please do get in touch on lustleigharchives@gmail.com

PLEASE NOTE: the society’s talks programme is also suspended until further notice (see below left for an update from our Chair)