When Ivy Jean Smeeth died in a Hertfordshire care home on 6th December 2011, she did so having lived for 94 years without ever knowing her father. When she was born in June 1917, he was fighting in the trenches of Ypres and five months later he became one of more than half a million Allied and German soldiers who perished in that bloodiest of campaigns. 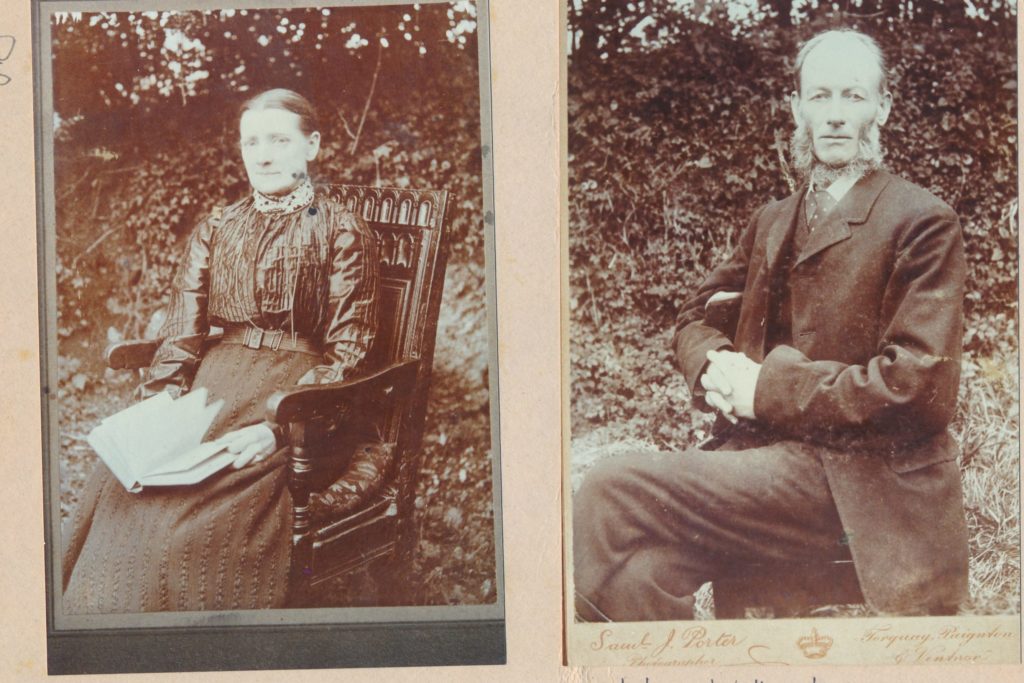 Ivy’s father was Henry Wills, one of the long line from that Lustleigh ‘dynasty’ to have grown up at Higher Hisley. Born on 23rd April 1885, he was the sixth of ten children of John and Elizabeth Wills. He was baptised in the parish church by Henry Tudor two months later and shortly after his fifth birthday he registered at the Board School, of which his father was one-time chairman.

When he was young, it was probable that Henry would have helped his father on the farm – either Higher Hisley or Waye, which he also owned – but it wasn’t a life he wished for himself. By the age of 16, he was apprenticed as a draper in Paignton where he lived with his aunt, coincidentally also in the parish of St John the Baptist. Ten years later, he was working as a drapers’ assistant in Hertford; what took him there is unclear – was his marriage, to Emma Jane Clarke, in neighbouring Bedfordshire, in 1912, the reason or the result? 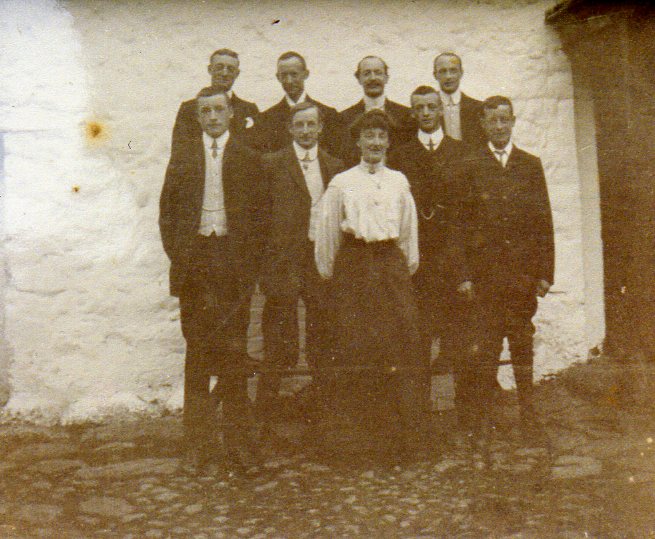 Some members of the Wills Family outside Higher Hisley Farm

Henry returned to Devon with his wife and he was carrying on his profession in Newton Abbot when he signed up in 1916. In doing so, he was following his youngest brother, Alfred, who was already serving in the Devon Yeomanry at the outbreak of war, and the next youngest brother, George, who had been called up into the Royal Engineers.

Henry attested in Exeter on 18th May 1916, at which time he was put on reserve, not receiving his call-up until September when he was posted to the Royal Field Artillery, initially joining their depot in Portsmouth before moving to a training camp built on Lord Lichfield’s Estate at Cannock Chase in Staffordshire. At the beginning of 1917, he was transferred to the Durham Light Infantry, first the 15th Battalion but then on to the 13th with whom he would mobilize to France.

Freezing weather welcomed Henry’s arrival with his unit at Winnipeg Camp, Ypres, where the fighting was comparatively light: deceptively so, that he would have no clues as to the horrors to come. Even then, Henry missed quite a bit of the action, finding himself admitted to hospital on more than one occasion suffering from scabies.

Officially, the Battle of Passchendaele (also known as the Third Battle of Ypres) began on 31 July 1917, but not for Henry and his comrades. The first week of August, for example, saw a concert, a football match, a revolver competition, a boxing competition and a cricket match; but perhaps this was to build moral before engaging in what officers no doubt knew would be a fierce and punishing campaign.

There followed a prolonged period of training, readying the 23rd Division, to which the 13th Battalion of the Durham Light belonged, for their part in this major offensive. Their opportunity came on 20 September with The Battle of Menin Road; despite that day being declared a success, Henry’s battalion lost a captain and 44 other ranks with a further 16 missing and more than 180 men wounded. The battle continued for five days with the allies sustaining over 3,000 losses. At the end of the assault, the 13th DLI received a letter from the 33rd Divisional Artillery saying that we “cannot let you go out without wishing you the best of luck and giving you our heartiest congratulations”.

Of course, other engagements were to follow and on 9 October it was preparing for another attack, moving from its camp at Westoutre, south west of Ypres, to Scottish Wood, described as a rest area before the front line. The following day, as they proceeded to take up their positions, the battalion was met with enemy fire and sustained further casualties with 34 wounded including Henry (and three missing). Initially, he was treated in the field, but a few weeks later was sent back to England, arriving at Bradford War Hospital on 5th November.

It is impossible to know whether he was visited by his wife and daughter living 300 miles away in Newton Abbot. The November parish magazine sympathised with Mr. John Wills, acknowledging “the serious wound to his son”, but such words may infer an expectation of recovery; if so, such optimism may have persuaded Emma from making the trip and thereby missing the only opportunity of introducing father to daughter and vice versa. Even if they had not met, Henry would of course have known that he had become a father, if only via a letter to his locker; perhaps when he was docked five days’ pay for being absent without leave just before Christmas 1916, he had been out celebrating the good news…

Sadly, Henry did not recover from his wounds and he died at 3am on 27th November; his body was sent to Higher Hisley two days later with his funeral taking place in Lustleigh parish church on Saturday 1st December. His final resting place is marked by a headstone, beside the path between the church and the old vestry, which not only recalls his demise but also remembers both his wife and daughter. As a resident of Newton Abbot at the time of joining up, his name appears on that town’s war memorial as well as on our own. 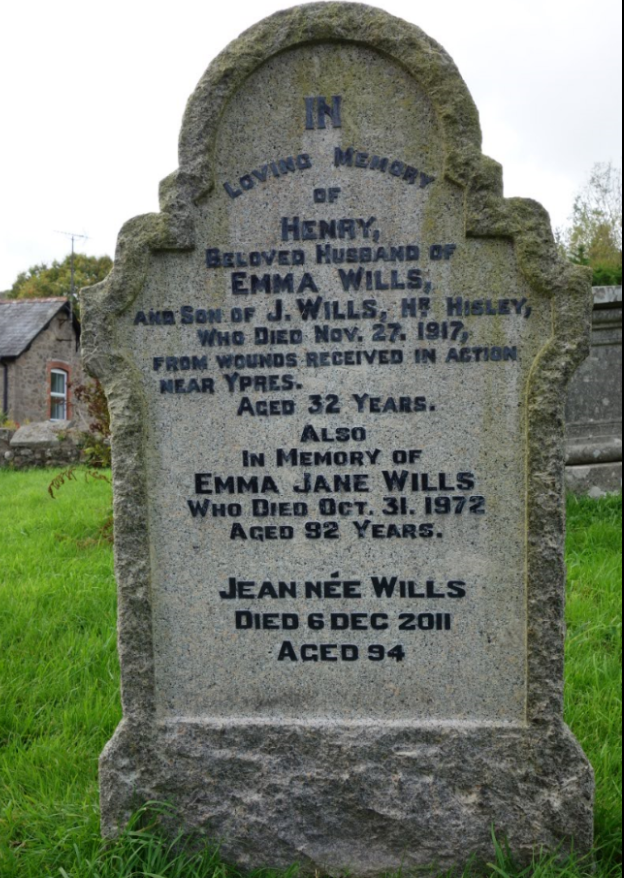 The following June (1918), Mrs Wills was awarded a war pension of 20s 6p per week, but it was a few more years before she received the true recognition of Henry’s contribution in the shape of his British War Medal and Victory Medal. No doubt, these were much cherished by both his wife and daughter; Ivy certainly treasured the few photographs she had of her father, which she kindly donated to Lustleigh Archives some years ago and which are reproduced here.

Henry Wills will be remembered on Monday 27th November when the Bell Ringers will sound a half-muffled peel in his honour.

The Lustleigh Community Archive is open….

Please note – We may have to close due to problems finding enough volunteer cover.  Watch out for updates on this page and on our Facebook page.