To misquote Oscar Wilde, to have lost one son in a military conflict must be heart-breaking, but to lose two must be agony. That is the fate that befell Brigadier-General Raymond Burlton Williams CB, whose eldest son died during the Second Boer War, unfortunately due to the accidental discharge of his own revolver, and his third son, Charles Ellicombe Williams, who was killed on the battlefields of Salonika in WW1.

There is reason to be thankful, though, as two other sons returned home safely. Charles’ older brother, Harold Radcliffe Williams, rose to the rank of major in the Gurkha Rifles serving in Burma and Mesopotamia. His young brother, Lionel Stewart Williams, who was serving with the Camel Corps at the outbreak of war, received a commission in the Flying Corps and miraculously survived a crash when his plane was brought down at 6,000 feet. One of their brothers-in-law also survived the Great War.

Charles was born on 7th October 1889 in Pennycross, Plymouth at which time his father was a captain in the Somerset Light Infantry and his mother, Ella Maud Radcliffe, was fending with four other children. Little is known about his early childhood, but in May 1905, Charles started at King’s School, Bruton in Somerset where “he soon gained a reputation for being a larger than life character; he approached everything he did with great enthusiasm, gusto and humour, and he was understandably a very popular member of the School” according to the school’s obituary for him.

Cricket was a major passion for Charles and his skill not only earned him a place in King’s Cricket XI, but also the Somerset County Juniors, his proficiency being such that he is listed in “Wisden on the Great War: The Lives of Cricket’s Fallen 1914-1918”. He enjoyed other sports too, being in both the King’s Football XI and their Hockey XI, crowning his achievements as Captain of Sports in his final year. 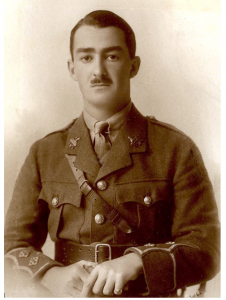 On leaving school in 1909, he went to Ceylon to work on a tea plantation and became an Assistant Superintendent on the Ratganga Estate. At the outbreak of war, he joined the Ceylon Planters Rifle Corps, a volunteer (reserve) regiment based in Kandy, made up of European tea and rubber planters. In October 1914, the unit sailed for Egypt and was initially deployed in defence of the Suez Canal against the Turkish threat.

The following year, Charles fleetingly joined the 9th Battalion North Staffordshire Regiment, before gaining a commission as a Lieutenant in the 7th Battalion South Wales Borderers on 23 March 1915. In June, he was appointed Adjutant and in September his unit landed at Boulogne: for a short while, they were concentrated near Flesselles in the Somme, but the following month were diverted for service in Salonika. They saw their first action in December in the Retreat from Serbia and the following year were engaged in various actions against the Bulgarian army including The Battle of Horseshoe Hill and The Battle of Machukovo.

Between 22 April and 8 May, 1917, the First Battle of Doiran took place, a major military offensive which began with a four-day artillery barrage in which the British fired about 100,000 shells. The action over these couple of weeks, though, was futile and the campaign had to be abandoned with the loss of 12,000 lives. After this, there was comparatively little activity on the British part of the Macedonian front except for local skirmishes.

Towards the end of May, the South Wales Borderers were in a defensive position at Whaleback Ridge, south west of Doiran; at 1600 hours, the enemy started shelling with at least one of the munitions having Williams name on it. Coincidentally, a Captain Leonard Vincent Williams was killed during the onslaught while Captain Charles Ellicombe Williams (he had relinquished his post as Adjutant and appointed Captain the previous month) was seriously wounded. Charles was transferred to a Dressing Station at Chaushitsa, the first unit of the medical services evacuation chain where injured soldiers were treated and prepared for the casualty clearing station. Sadly, Charles was so seriously injured that he died of his wounds.

Initially, Charles was buried at the newly constructed military cemetery at Chaushitsa (also known as Caussica), but the graves from here were transferred to Karasouli Military Cemetery in November 1920 where his gravestone stands today bearing the words “For God, King and Country”.

The 1917 summer edition of King’s School Bruton’s magazine, The Dolphin, reported Charles loss, stating that “Though not intellectually gifted, his intense keenness and enthusiasm soon won him a real position in the School. He was a sportsman of the best type, a prominent member of all our elevens, and probably the best remembered of them by our visitors. His cheerful aggressiveness and dauntless determination were such as leave an enduring recollection. But unhappily it is just such lives that War most surely claims among its victims. England is poorer by the loss of such a life and example.”

Charles, himself, was probably little known to Lustleigh, the connection being through his parents who moved to Pinkhurst (now Combe Hill) after his father retired from his post as Assistant Adjutant and Quartermaster-General of the Gibraltar Garrison in 1912, an appointment which capped a distinguished military career including the Zulu War, South African War and the Relief of Ladysmith. He served again in the Great War, was churchwarden in Lustleigh from 1916 to 1920, shortly after which he and his wife moved to Ashprington.

Charles Ellicombe Williams will be remembered on Saturday 27th May when the Bell Ringers will sound a half-muffled peel in his honour.

Sources used in compiling this story have included: