As the country commemorates the centenary of the start of World War I, in 1914, it is a time to focus more closely on Lustleigh’s own war memorial, and those listed on it whose association with the village was so tragically cut short when they gave their lives for their country. It is a time to remember that behind each name etched into the stone was an individual with their own story and with all of the hopes and dreams that we can also associate with, and someone that was as familiar with the village as we are. 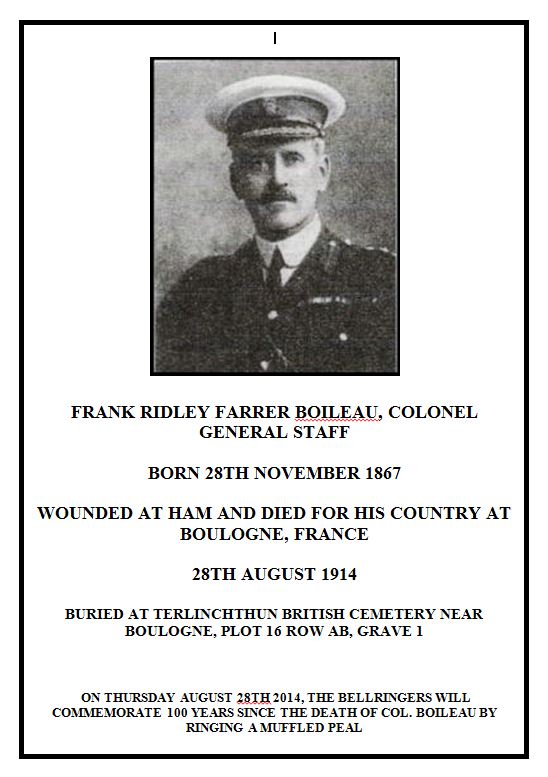 On 28th August 1914, just three weeks after the start of the Great War the first of those commemorated on the Lustleigh war memorial died of his wounds in France. It was tragic to die so soon after the start of the war but at least Col. Frank Boileau reached the age of 46 having had a life full of achievement. The average age of those listed on the Lustleigh memorial for the first war is below twenty-five.
Born into a military family on the 28th of November 1867, in Lucknow, India, Col. Boileau’s father was a Colonel, his grandfather was a Major General, and his uncle was Colonel Bradford of Welparke, Lustleigh. Educated at Cheltenham College, his family background meant that he was always destined for the military, and after undergoing military training, he was commissioned in the Royal Engineers in February 1887, as 2nd Lieutenant. There followed seven years’ service in India, with him becoming a Captain in the Royal Engineers from 1897.
As a Royal Engineer the then ‘Captain’ Boileau was heavily involved in the logistics for the British army’s relief of the siege of Chitral from warring tribesmen in March and April 1895, in what was then northern India. The action has gone down as a major victory in the annals of British military history.
Postings in Africa followed for the Captain, including action with the Royal Engineers alongside the 9th Infantry Division in the South Africa war, which lead to him being mentioned in despatches by Lord Roberts in March 1900.
Whilst back in England in January 1902, he married Mary Aurora Tudor, the daughter of Sub-Dean Tudor, Rector of Lustleigh, at a ceremony in Newton Abbot. Since her father’s death, Mary Tudor had been an advowson* of the parish of Lustleigh.
Following four years back in India from 1906, teaching at the staff college in Quetta, Baluchistan, Captain Boileau was promoted to Colonel on the 21st of January 1910 and was with HS3 Division as GSO 1 (General Service Officer) when the Great War broke out.
The 22nd of August 1914 was the bloodiest day of the entire western war when the French alone lost 27,000 dead. Colonel Boileau was wounded four days later at Ham, France, immediately before the battle of Le Cateau. He was evacuated to a military hospital in Boulogne but died of his wounds on the 28th August. He is buried at Terlincthun British Cemetery near Boulogne, Plot 16 Row AB, Grave 1.
The battle of Le Cateau was an extraordinary action by the British, under the command of General Sir Horace Smith Dorrien against the oncoming Germans, one of the last of its kind in History. Unlike the earlier battle of Mons, just to the north, where the majority of casualties were from rifle fire, Le Cateau was an artilleryman’s battle, demonstrating the devastating results, which modern quick-firing artillery using air-bursting shrapnel shells could have on infantry advancing in the open.
After the war, his widow Mrs Mary A Boileau resided at Windout Hill House in Exeter. She died in 1958 aged 83. They had three sons – Etienne Henry Tudor, Peter Claude and Hugh Even Ridley. In the Lustleigh Parish Magazine of October 1914 the rector, Herbert Johnson, wrote how “the death of Colonel Boileau had touched many hearts in Lustleigh, and that Lustleigh should feel some of the pride as well as of the sorrow caused by his death – R.I.P.”
In August 1916, the Parish Magazine noted that the memorial tablet on the south wall in Lustleigh Church to Colonel Boileau had been approved and the September issue recorded that it was now in place. Mrs Mary Boileau and her three sons were present at a short dedication service held on 26th September. The rector noted, “There will, we think, be a general admiration of its taste, execution and agreement with its position and surroundings”.
Colonel Frank Boileau is also listed on the village memorial at the foot of Mapstone Hill, which was erected a few years after the war.

* In ecclesiastical law, from advow or advocare, a right of presentation to a church or benefice.
We wish to acknowledge the help of Colin Gibson with editing this piece.

On Thursday August 28th, the church will ring a muffled peal in honour of Col. Boileau.