Glasgow, Lustleigh and Toronto have rarely, if ever, been written in the same sentence, but they form the backdrop to the story of Hugh Douglas Livingstone who perished on the French battlefields on 27th July 1918. It is also a story which throws up some tantalising questions which, for now, remain unanswered.

Douglas, as he was commonly known, was born in Glasgow in 1885 and moved to Lustleigh with his family, probably when he was just two years old. It is believed to be the shiny ore mines of the Wrey Valley which lured his father, Alexander, south of the border: by 1892, he was Chief Agent at Plumley Mine, but he may have been involved in Kelly Mine when he first arrived. It has been suggested that the relocation was through a connection with Scottish businessman, James Dick, who had an interest in Plumley Mine, and perhaps Kelly too. It was very likely a strong connection, possibly even a close friendship, considering that when Alexander’s 6th child was baptised in Lustleigh church in 1894 he was given the name James Dick Livingstone.

Douglas attended Lustleigh Board School where his father was clerk and he was clearly a star pupil, reaching the unusual heights of 7th Standard before moving on to Torquay Grammar School. Perhaps this is not a total surprise considering that this was clearly a very bright family as is suggested by Alexander’s profession and the role of Douglas’ elder brother William during WW1 as an intelligence officer in Africa.

Sadly, Alexander was struck down in 1897 following a long illness, possibly pneumonia or ‘miner’s lung’, which were occupational hazards in his line of work. Suddenly, his wife, Margaret, found herself as a single parent with six children to care for. One daughter, Annie, just short of her tenth birthday, moved to Scotland to live with her eldest brother and aunt while the rest of the family moved to Bovey Tracey where accommodation was found in the Town Hall, and where Margaret became caretaker of the armoury for the town’s Territorial Force soldiers (part of the 5th Devonshires).

It is likely that Douglas remained in the family home for a while to help his mother look after his younger siblings, but when they became more self-sufficient he moved to London and became a civil servant. It is here where two of the most intriguing aspects of his life remain unanswered.

In the November of 1911, in the parish church of North Brixton, Douglas married Margaret Macaulay Gray. Sharing, as she did, the same middle name as his mother, it is highly likely that they descend from the same clan. Certainly, his family has a proud tradition of retaining family names: Douglas, himself, taking his mother’s maiden name. There was also another child, born in Lustleigh, but who died aged just 5 months who had been baptised Macaulay Livingstone. It is almost inconceivable that there wasn’t a link between the two women in his life, but it is a conjecture which remains to be proven.

The second puzzle about this stage of Douglas’ life was his decision in February 1914, less than two years after the birth of his first son, Alexander Douglas Livingstone, to set sail for Halifax with the view of settling in Canada. Although his travelling alone could be explained by going ahead to prepare for the intended later arrival of his wife and child, why did he want to exchange a stable, well-paid job to become a farm labourer? Or was this simply a clerical error in the ship’s passenger log? With the First World War interrupting his plans, we shall never know his original intentions.

On 20th January 1915, Douglas presented himself at a recruitment office in Toronto to sign up for service in the Canadian Overseas Expeditionary Force, disclosing on the attestation form that prior to leaving England, he had seven years’ experience with the London Rifles.

Initially appointed sapper in the Canadian Engineering Training Depot, he was soon on a ship back to England and found himself moving around various locations including Tidworth Barracks near Salisbury Plain, but principally Shorncliffe Army Camp in Kent.  During his first month, he was made Acting Lance Corporal and in May he was promoted to 2nd Corporal Orderly Room Clerk. In October, he was mobilised to France and by the end of the year he had been elevated to the rank of Sergeant as Engineers Clerk in the 4th Field Company, Canadian Engineers.

Douglas’ service record indicates that he was regularly being moved around to different parts of the Canadian contingent, sometimes in France and other times back in England, such as a few months in the middle of 1917, when he was stationed at the Canadian Military School in Crowborough, East Sussex. The birth of a second child, David James Livingstone in 1917, suggests that he was occasionally granted leave; it was certainly recorded that he had 14 days leave to the U.K. in March 1918 which lead to the birth of a daughter, Margaret, five months after his tragic end.

It is unclear precisely when Douglas returned to France, but in July 1918 he found himself at Anzin; by now, he was a Lieutenant in the 2nd Battalion, Canadian Infantry (Eastern Ontario Regiment) and was making preparations to advance to the front line.

On July 23rd, his battalion travelled by train to Neuville-Vitasse on the outskirts of Arras, the following day proceeding to the trenches at Wailly Wood Camp. They experienced low levels of activity over the next few days, with very little shelling and aerial activity hampered by the weather, so their efforts were mainly directed towards repairing and deepening trenches and other defences. In such mundane circumstances, it is particularly unfortunate that during one of the tours, while in charge of a wiring party, Lieut. H.D. Livingstone received a machine-gun bullet to the chest and right arm at 1.30 in the morning, with his death being reported 45 minutes later.

Today, his body rests just yards from where he fell, in the Wailly Orchard Cemetery which was started in May 1916 by the Liverpool battalions of the 55th (West Lancashire) Division, as a front-line cemetery, but considerably enlarged between March and August 1918 by the Canadian and other units defending the Third Army front. He is, of course, remembered on the Lustleigh war memorial. 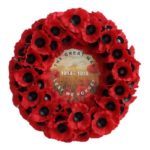 Hugh Douglas Livingstone will be remembered on Friday 27th July when the Bell Ringers will sound a half-muffled peel in his honour.

As well as particular thanks to Nick Walter of Kelly Mine Preservation Society, who provided much information, other sources to be acknowledged include: