Mr Edwin May must have taken great solace in the gathering that assembled in Lustleigh Church on Saturday 15th July 1916 to remember his only son who had fallen at the front less than two weeks earlier.  People came from far and near with one villager reporting that he had never seen so many people in the church before; many of them not regular church-goers and some who had not been since their wedding, but they came to show their respect for the boy they all loved and sympathy for his father.

In his address, Rev. Johnson said, about Edwin Wilfred Wrayford May, that he was not someone who could have ever chosen the army as a profession, nor did he have any taste for fighting; rather he possessed a great sense of beauty and was far more in his element working in his garden or putting a touch to a vase of flowers. Similarly, a friend had once said “it will not do for you to join up, you are too gentle”, to which he countered that he would never be a coward. So, seeing his duty, and with his father’s blessing, he joined the cause.

It must have been especially hard for Edwin to wave off his son from their house at Rudge Farm, which had become increasingly empty in recent years. His only daughter was married in 1909, his wife died in 1911, one of his main farm hands had joined the Royal Navy in 1912 and even his son’s  bay jumping pony, Rex, had been requisitioned by the army the day after war was declared. Indeed, the worry for his son weighed so heavily on Edwin that he felt unable to continue as Churchwarden, resigning in May 1916 after 22 years service.

Edwin Wilfred Wrayford May, had been baptised in Lustleigh on Ascension Day 1891. As well as helping his father farm the 135 acres at Rudge, Wilfred (as he was known, or Fred to his army pals) was a prize-winning amateur gardener, a very fine horseman and, it was said, it took a good man to equal him with his gun, rod, bat or racket.  Perhaps little wonder then, that it was the Sportsmen’s Battalion that would have him among its ranks.

Wilfred answered the call of Lieut. AE Dunn, one time MP and Mayor of Exeter, who held many rallies in the city and surrounding areas calling upon men to form a special Western Company of sportsmen from Devon and Cornwall, later to be known as ‘C’ Company of the 2nd Sportsmen’s Battalion. On February 22nd 1915, he enlisted at the recruitment centre in Castle House, Castle Street, Exeter, the offices of the solicitors Dunn and Baker, of which AE Dunn was a founder.

A few days later, the Battalion was given a farewell concert at Barnfield Hall, followed a week later by an inspection by the Mayor of Exeter at Bury Meadow. Then, on March 16th, after a supper the previous evening at King’s Hall, St Thomas, the men began their journey, parading past throngs of well-wishers along Sidwell Street, the High Street and Queen Street before departing St David’s station on their way to camp at Hornchurch.

They later moved to Tidworth in Wiltshire where, on 8th November 1915, Wilfred took part in review of the 33rd Division and a march past in front of The Queen. One week later, the 2nd Sportsmen’s Battalion, otherwise known as the 24th Battalion Royal Fusiliers had landed in France. The early days were occupied with training interspersed with football matches, but it wasn’t long before the men proceeded to the front and engaged in fighting with the enemy often entrenched as little as 250 yards apart.

By the end of June, they were on the front line at Carency, north of Arras in the Pas-de-Calais. The night of July 3rd saw particularly frantic action. The Germans had blown a crater of strategic value to the allies, so it was quickly occupied by a small band of bombers and a party of two NCOs and thirty men who worked through the night to consolidate the crater.  As the work continued, a heavy bombardment was exchanged between the two sides; Private 3193 caught some shrapnel and died within minutes.

“It is with deepest regret that I write to you, to condole with you on the loss of your son”, wrote a comrade from the trenches. “Fred and I stood side by side when we took the oath of service to our King. In training, we were always together. In France, we slept next to each other, and in the trenches, we stood shoulder to shoulder. The night you lost a son, I an incomparable companion in arms. A mine exploded, and Fred was amongst the first to jump the parapet and take up a position on the top of the crater. In the willing discharge of his duty, he was hit by pieces of a grenade and was mortally wounded, dying in my arms”.

He went on to mention the high esteem in which he was regarded, “his quiet unassuming manner endeared him to us all, and gained for him a popularity envied by us all. His loss stings us deeply”. 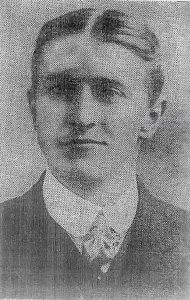 The following night, Wilfred was buried by the Chaplain in the valley behind their lines.  Today, a few kilometres away, he is remembered at Zouave Valley Cemetery, on the outskirts of Souchez. He is also commemorated by The Royal Fusiliers memorial at Holborn in London, erected as a tribute to the 22,000 men of the regiment who lost their lives in the Great War. He was posthumously awarded the 1914-15 Star, the British War Medal and the Allied Victory Medal, which were respectively and endearingly, nick-named Pip, Squeak and, most appropriately, Wilfred.

During his short time in the army, Wilfred was twice offered a commission, but he refused on both occasions, preferring to stay with his friends and fight in the ranks where “he was a splendid soldier”, according to his Captain. “Admired and respected by his officers, beloved by his comrades”. His quiet and gentle personality, says his obituary “endeared him to the whole countryside, and made him the favourite in the village”.