In the North East corner of our churchyard, you will find a memorial to Samuel Maunder.  Sam died on June 5th 1915 and was buried there five days later. On the grave, there is a single red rose and a note reading
ALWAYS REMEMBERED BY HIS SWEETHEART MARY MAUDE (MORTIMORE) MARSDEN AND HER FAMILY This rose and the note bears witness to the great love and loyalty that Samuel inspired in another, as will be explained later. 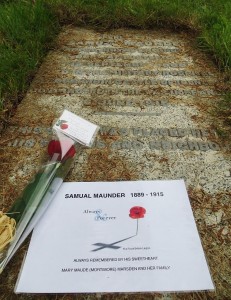 Samuel Maunder was born in Lustleigh on December 2nd 1888, the son of William Maunder and Elizabeth née Osborne of Bowhouse Wreyland. He was baptised by Rev. Tudor. We know little of Samuels’s early life as he grew up in Lustleigh, but have found a clue that he was full of mischief. In Cecil Torr’s Small Talk in Wreyland, Torr wrote about the Wild Beast Shows, which moved round the towns of Devon, the camels and elephants being walked along the roads. He wrote that there was a salamander in one of these that an old lady described to him as “a critter as they calls a Sammy maunder”. Torr explained that Sammy was a Lustleigh boy that died in the war that used to play tricks on her, and she thought his fame had spread!

Samuel moved away from the village for three years to serve as a sapper in the Royal Engineers as soon as he was old enough. When he returned to Lustleigh aged about 20, he became an army reservist for six years before being called up in August 1914. We know he had just set up as a fish and poultry dealer living at 1 Pound Cottage when he was recalled to serve with the Royal Engineers. The only clue we have as to how he earned his living before that comes from a local newspaper report in 1913 of the funeral of an ex Kelly miner. The report said that his mates from the Kelly Mine were the bearers at his funeral and S. Maunder was listed as one of them, so it could be that he was employed there. There is no other evidence to support this however.  In 1911 when Sam was aged about 22, Lustleigh joined the celebrations for the Coronation of King George V. One of the events held was a sports day at Woodpark Meadow. Samuel came first in the high jump, second in the quarter mile, and was leader of the winning tug of war team. He was also listed as winner of the cock fighting! This had been banned since 1835 so it must have been the human equivalent,
In the early part of 1915, whilst serving abroad Samuel became very ill with TB and was sent back from France. He was sent to Dunrobin Castle in the North East of Scotland where huts had been built in the grounds for TB patents. The Duchess of Sutherland, who owned Dunrobin Castle, went to Belgium and France in August 1914 to set up field hospitals and worked in some of them. It might be that Sam was one of her patients, which would explain why he was sent to a hospital so far from his home.
Sam died three months after arriving in Scotland. In the July 1915 Parish Magazine the Rev. Johnson wrote about the remarkable demonstration of sympathy at Samuels’s funeral in Lustleigh. He wrote that a large assembly of parishioners of all classes were present at Sam’s funeral, and noted that Samuel had settled down in Lustleigh and had “marriage in view”.
These words “marriage in view” take us forward 100 years to explain the red rose now on the grave in our churchyard and the love story behind it*. In August 2014, the archive was contacted by the granddaughter of Mary Maude Mortimore. She explained that Sam and Mary were childhood sweethearts who grew up together in Lustleigh. Mary was born in Brook House in 1894, one of twelve children of William Mortimore. When the rest of Mary’s family moved to London, she stayed in the care of her aunt and uncle – Lillian and Scott Painter – who ran the Cleave Hotel. Aunt Lillian did not approve of Sam as she considered him of a different class. When Sam returned from France Mary joined him, and his Mother, in Scotland against Aunt Lillian’s wishes.  When Samuel died, Mary stayed on in Scotland for a time, and never returned to Lustleigh She did meet her Aunt again but not until 1934.  Mary never forgot Sam even after she got married. She would often cry when she thought about him years later, and always on Armistice Day. Mary’s son is now 94 years old but still came to Lustleigh last year to visit the grave of his mother’s great love, even though Sam was not his father. It was during this visit that flowers were put on the war memorial, and the rose on the grave.

* One hundred and thirty-nine friends and neighbours from the village paid for Sam’s memorial (a list of their names is held in the Archive Room).
On Friday 5th June 2015 there will be a muffled peal rung in memory of Samuel Maunder who died 100 years ago, the second of those on our memorial to die in the Great War.

THE ARCHIVE ROOM WILL BE CLOSED UNTIL NEXT YEAR.  THE TALKS PROGRAMME IS ALSO SUSPENDED… read more….

Sadly, bearing in mind the small size of the room, the cost and effort in sanitizing all vulnerable surfaces and the nature of the work (which involves the handling of files and papers by several people), The Lustleigh Society has decided that the archive room will remain closed for the rest of this year.

Since we always shut in December and January, the proposed date for re-opening will be the first Monday in February, 2021.

If you need to contact us for any reason, or have an enquiry we can help you with via email please do get in touch on lustleigharchives@gmail.com

PLEASE NOTE: the society’s talks programme is also suspended until further notice (see below left for an update from our Chair)