From the Domesday Book we can see that in 1065, in the reign of King Edward the Confessor, the manor of Lustleigh was held by Ansgar and prior to that by one Walter.  There is quite a gap in the records until we come to the early part of the 13th century when a William de Widworthy held the manor from 1200 to 1224. His wife was called Juliana and they had a daughter Alice and a son Hugh. Alice married a member of the Le Prous family from Gidleigh and they had a son – William Le Prous.
Hugh de Widworthy inherited the manor from his father and in turn his daughter – Emma Dinham – inherited the title. Emma and her husband Robert were Lord and Lady of the manor until 1291, but having had no children the manor passed to Emma’s cousin William le Prous.
There is an effigy of Sir William le Prous in the wall of the south transept of Lustleigh church. 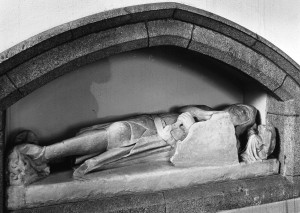 In the north wall are effigies of a knight and a lady. As all records of these have been lost, there is some dispute about who they are. One view is that they are in fact Sir Robert Dinham and Lady Emma Dinham. Another theory is they are William de Widworthy and his wife Juliana. On the death of Sir William le Prous in 1316, the manor passed to his daughter Emma, who was married to Roger de Moelis. From then on several ancestors and relatives of theirs held the manor of Lustleigh: Firstly inherited by their daughter Alice de Moelis and her husband John Daumarle. Secondly by their son – Sir John Daumarle and his wife Isabella. Thirdly – as John and Isabella had no children – the manor passed to Clarice, Sir John’s sister. She was married to Richard Grenville. There is some uncertainty as to who succeeded them, as by rights it should have been Clarice’s daughter Alice Carndon and thereafter to their daughter and her husband – Joan and John Durford. Historical evidence suggests that these three women were tricked out of their rightful inheritance by the machinations of the sons of Isabella by her first marriage to John Tremayne.
The next verified information cites William Burleston purchasing the manor at the end of the 14th century. It is not clear if he bought it from Joan Durford or one of the Tremayne sons; in 1403 Burleston sold the manor of Lustleigh to Sir John Wadham. To be continued in part two together with a somewhat macabre tale befitting Halloween…

The above is taken from: Chapter V, “The Story of Waye”, by Hugo Pellew and based on research by Dr. M. H. Hughes