John Riddler came from Devon farming stock. His father was born into a farming family in Chudleigh and continued to work on various farms in the area for most of his life and his older brother (John was the second of nine children) followed suit. So, it wasn’t long before John started down the same track, by the age of 13 being employed as a farm servant at Ruggadon (also in Chudleigh parish).

However, it was clearly not the life for him and in 1892, aged 15, he joined the Royal Navy as a Boy 2nd class. There would likely have been a height requirement, but this brown-haired, blue-eyed boy’s 5ft 1¼ins were seemingly sufficient to pass the regulations. It is also probable that he would have needed his parents’ consent, but perhaps they acquiesced as he was not officially signing up at this point. Clearly, the choice suited him as, having progressed to Boy 1st class after the first year, on his 18th birthday, 20th April 1895, he put pen to paper and committed to serve for 12 years.

Following training at the Seamanship, Signalling and Telegraphy School at Devonport, Vivid I, John became a Signalman. His service record suggests his time alternated between serving on battleships and further stints in the classroom. In 1897, he joined the crew of HMS Amphion, a Leander-class cruiser that spent the next few years serving on the Pacific Station which, at that time, played a crucial role in defending British Columbia from US aggression and its threat to annex the territory.

During his time in the Pacific, John was promoted to 2nd Signalman and, following the ship’s return in 1900 he transferred back to battleships although largely serving in home waters. Was it the lack of action that propelled him to buy himself out of the navy in June 1901 or was it the love of a good woman, one Alice Maud Short in particular, who he married on October 3rd of the same year?

He quickly settled into family life in Chudleigh and they produced their only child, Caroline Florence Louise the following September. John became a granite quarryman and by 1911 he was living in Lustleigh, boarding at Rock Cottage with George and Mary Maunder; this was presumably to be closer to work as his wife and daughter were still living in Chudleigh and didn’t follow on to Rock Cottage until some time later. 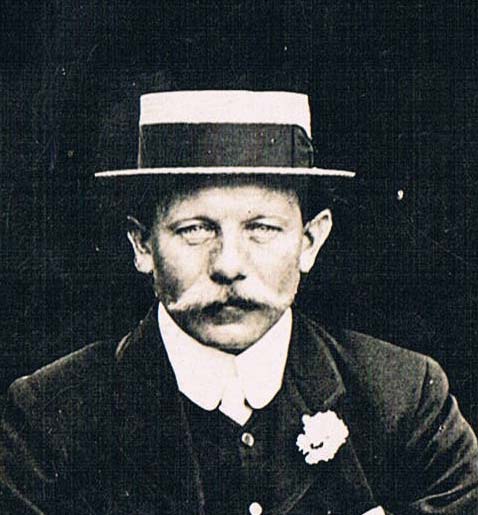 After war broke out, the Navy beckoned again and in June 1916 he enrolled in the Royal Naval Volunteer Reserve, being called into full service the following year. Thus, on 20 March 1917, John was back at Vivid I as an ordinary seaman. Quite what duties he might have been called upon to undertake during the Great War, we shall never know as barely three weeks had passed when he died in his hammock, after only a few hours of illness, from cerebro spinal fever, otherwise known as meningitis; his passing, on April 12th coming just eight days before his 40th birthday.

Alarmingly, John’s death was not unusual: close inspection of comrades buried alongside him in the ensuing weeks reveal this to be a common cause. Indeed, according to a lecture given to the Royal College of Physicians in London in 1919, cerebro spinal fever became a prominent issue during the war due to the crowding of recruits into camps and barracks. Epidemics typically lasted for 6 months and in 1916-1917 more than 20 per cent of the cases occurred within three weeks of joining the service, with new entrants being most at risk, a statistic which chillingly echoes John Riddler’s own fate.

John’s funeral took place five days later with his coffin borne on a gun carriage draped with the Union Jack and then carried by his comrades to the graveside where he was buried with full naval honours and respects. Many of his family attended, although three of his brothers were prevented from doing so, themselves being on active service at the time. He was laid to rest at the Plymouth, Devonport and Stonehouse Cemetery (now known as Ford Park Cemetery), but this wasn’t the original plan: according to his granddaughter, Winifred Horrell, the burial had been scheduled for Lustleigh, but on the evening before the funeral, his widow received a telegram informing her that it had been switched to Plymouth. The precise reasons for this are unclear.

His body may not be here, but his spirit is of course, remembered on our war memorial, honouring the strong local connection he had established: he had become an active resident and, according to his obituary, “took a keen interest in everything that was for the welfare of the village”; he was secretary of the flower show and of the Constitutional Club. His links were maintained through his wife who remained here until she died in 1960 and his granddaughter who was born, baptised, confirmed and married at St John the Baptist Church. His association with Chudleigh was not forgotten either, and his name also appears on their war memorial.

John Riddler will be remembered on Wednesday 12th April when the Bell Ringers will sound a half-muffled peel in his honour.

I am enormously appreciative to John Riddler’s great, great granddaughter, Carole Chick, for the photograph accompanying this article as well as one or two snippets of information. Other sources used have included: